The whoopie pie (alternatively called a black moon, gob (term indigenous to the Pittsburgh region), black-and-white, bob, or "BFO" for Big Fat Oreo) is a US baked good that may be considered either a cookie, pie, or cake. It is made of two round mound-shaped pieces of chocolate cake, or sometimes pumpkin or gingerbread cake, with a sweet, creamy filling or frosting sandwiched between them. 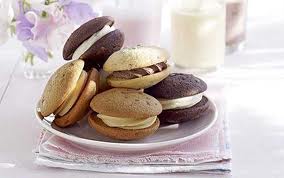 The whoopee pie can also be filled with extra stuff like fruits and coolie!

While considered a New England phenomenon and a Pennsylvania Amish tradition, they are increasingly sold throughout the United States. According to food historians, Amish women would bake these desserts (known as hucklebucks, or creamy turtles at the time) and put them in farmers' lunch pails or lunch boxes. When farmers would find the treats in their lunch, they would shout "Whoopie!" It is thought that the original Whoopie pies may have been made from cake batter leftovers. 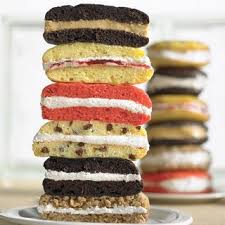 You can also make them in different flavours.

Get excited, go home, bake some whoopie pies, fill them, eat them and share your experience with us.