Hello People,
My team in cburch had to organise a themed party. Well, we went with a Tea Party theme.
Formal tea parties are often characterized by the use of prestige utensils, such as porcelain, bone china or silver. The table is made to look its prettiest, with cloth napkins and matching cups and plates. In addition to tea, larger parties may provide punch, or in cold weather, hot chocolate. The tea is accompanied by a variety of foods that are easy to manage while in a sitting room: thin sandwiches, such as cucumber or tomato, cake slices, buns or rolls, cookies, brownie, biscuits and scones are all common. We had all the sandwiches  you could  have imagined but the rain started. Must of the food went back inside. 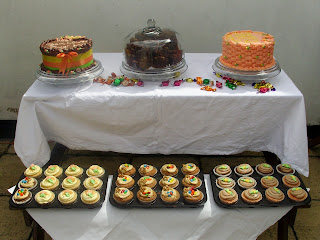 The afternoon tea party was a feature of great houses in the Victorian and Edwardian ages in the United Kingdom and the Gilded Age in the United States, as well as in all continental Europe (France, Germany, and above all in the Russian Empire). The formal tea party still survives as a special event, as in the debutante teas of some affluent American communities.
In the older version, servants stayed outside the room until needed. Writing in 1922, Emily Post asserted that servants were never to enter the room unless rung for, to bring in fresh water and dishes or to remove used dishes. This was partly due to the rigidity of social convention at the time, but it also reflected the intimate nature of the afternoon tea. Proving the truth of 18th-century author Henry Fielding's quip that "love and scandal are the best sweeteners of tea", the custom of banning servants from the drawing room during tea shows the hostess's desire to encourage free conversation among her guests. Most of the formalities of that age have disappeared, particularly since World War II, when economic changes made household servants a rarity, but afternoon tea can still provide a good opportunity for intimate conversation and a refreshing light meal.
Tea parties are also created by young children where the guests consist of stuffed animals, dolls, friends (both real and imaginary) and family members. 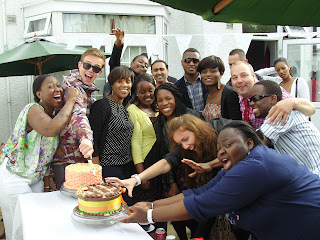 All am saying is, we had a blast!